UPDATE 4/20: The SPARQ table now includes most players with pro days occurring prior to March 20th. The image is a much higher-resolution than was used previously. Note that the “Comb.” column refers to those who were invited to the NFL Combine in February. Any numbers that are underlined and italicized comes from junior day data via Tony Wiltshire.

Note that the “Percentile” and “z-score” columns refer to the NFL positional averages and not to the draft positional averages. This means that a 0.0 z-score and 50.0 percentile would represent a player who rates as a league-average NFL athlete at the position. The average NFL player is pretty athletic, so this designation is not at all a poor result.

Disclaimer: pSPARQ is not perfect and will not yield a perfect representation of any player’s athletic profile. It is meant to give us an idea of where a given player stands athletically relative to his peers. If you have any questions about the particulars, I posted an FAQ: https://3sigmaathlete.com/faq/.

All above the 50th percentile (i.e., above-average): 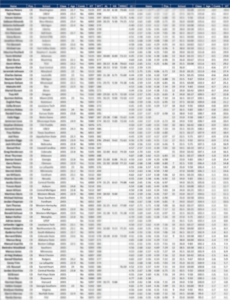